AL-ASR Society of Australia is a Melbourne based not for profit making organisation. It was inaugurated on the day of Eid e Ghadeer on 9th of September, 2017.

Al-Asr centre also consist of the following facilities:
1. Masjid
2. Imam Bargah
3. Islamic School/Madrassa with fully equipped classes.
4. Full fledged Funeral Parlour/Ghusl Khana.
5. Two Library areas (male and female).
6. Sports & Recreation facilities.
7. Banquet Hall, Cold Storage and Commercial Food Serving Facilities.
The center has 6 halls including two masjid areas which can accommodate around a thousand people for namaz and Islamic programs.
It will be unfair to go pass mentioning that in order to build this center several hurdles were put forward by different authorities for which several meetings were held with concerned authorities, but Alhamdulillah and with the help of Imam Al-Asr (ATFS) the society was finally granted the approvals by the local council to build the Islamic Centre in Altona North.
As we see it, this is just the start of this never ending journey (Insha-Allah), it is also worth mentioning that Br. Zaki stood firm in taking every hurdle head-on and succeeded in getting the approvals finally.
We would like to request you all, to please recite Surah-e-Fatiha for his Marhoom Father Br. Ghulam Abbas, who departed this world with this dream in his heart, which his son Br. Zaki is now fulfilling (Masha-Allah). May Allah (S.W.T) give Jaza-e-Khair to Br. Zaki and barakat in his rizq (Insha-Allah).
2017-09-07
Hamzah Zaki
Share

IN THE NAME OF ALLAH, THE MERCIFUL, THE COMPASSIONATE

We request you all to recite Surah e Fatiha and Dua e Maghfirat for the departed soul. 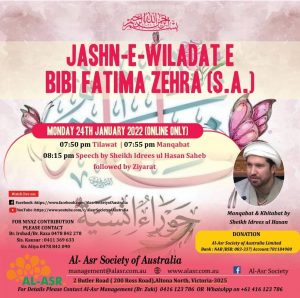